They will present an
Advanced Argentine Tango Master Workshop
(For Instructors & Advanced Students): 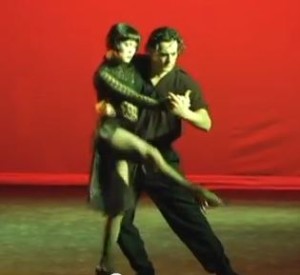 Born in Argentina, Carlos Barrionuevo is one of the most extraordinary and internationally renowned Master Tango Dancers in the world!

Carlos was born to dance, honing his craft by countless hours of practice and study as a young man. More recently, Carlos discovered a similar passion in the art of acting. Converting his theatrical energy to film, he is poised to become a riveting screen presence.

Carlos was born on May 26,1982 in Santa Cruz, Argentina. He began to dance tango when he was twelve years old and developed his technique by studying the great masters of tango. He was invited to perform with tango legends such as Ricardo “Chiqui” Pereyra, Enrique Dumas, Raul Lavie, Maria Grana, Guillermo Fernandez, and Mariano Mores. In April of 2005, Carlos won the championship of the Patagonia Tango Festival in San Carlos de Bariloche.

Gaining momentum as a dancer, Carlos went on to perform in several award-winning Tango shows, including Tango Emotion, Tango Historias Breves, Sabor a Tango, Tangorama, and many more. These shows took him on international tours throughout Italy, Russia, Chile, Turkey, Israel, Uruguay, Canada, United States, and Mexico. In September of 2006, Carlos became the assistant choreographer for the Teatro Argentino de la Plata regarding their show Tangomanon.

In Buenos Aires a year later, Carlos began performing with Mayte Valdes in prestigious Tango houses and they soon began a partnership of dance and marriage.

Mayte Valdes is highly trained in diverse dance techniques such as classical ballet, modern, jazz, and tango. Her dedication to her dancing craft and her ability to invoke emotion translates seamlessly into the world of acting. This form of performance is new to Mayte and she is excited to delve into the cinematic landscape.

Mayte began dancing when she was 6 years old. At a very early age she performed with the company Miami City Ballet. She was featured in The Nutcracker, which toured throughout Florida. She later continued her studies in Buenos Aires, Argentina at the Teatro Colón and with various ballet masters.

A few years later, Mayte was trained in Argentine Tango by the greatest tango masters in Buenos Aires and fell in love with that dance style. She went on to perform in many tango shows: Chiquilin Tango, Tango en el Maipo, Tango Historias Breves, and Tanguera: The Musical, to name a few. Mayte also performed with Grammy award-winning pianist Pablo Ziegler.

Together, Carlos and Mayte performed in prestigious tango houses such as El Viejo Almacen, El Cafe Tortonni, and Chiquin.

In December of 2007, they formed part of the cast for the show Forever Tango, performing at the Teatro Coliseo Podesta in La Plata, Argentina for the release of the company’s new DVD. They were also honored to perform with Grammy award-winning pianist Pablo Ziegler. A year later, Mayte and Carlos choreographed and performed for the Teatro Zinzanni and Snoqualmie Casino.

Carlos and Mayte recently made their film debut by starring in lead roles in “Niña Del Tango,” a short film directed by Jason Eberly that premiered in Los Angeles and New York in early 2012. The film is currently making its rounds in the international film festival circuit.