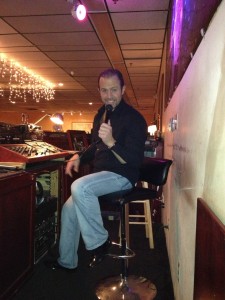 Louis Del Prete, who lives and works in New York, frequently visits and acts as independent DJ at Goldcoast Ballroom when he is in Florida.

Louis Del Prete is a talented musician and dancer. He is accomplished on drums, keyboards, and trumpet, and is a fantastic singer. Louis is also an excellent ballroom dancer and teacher.

Louis’s skills started at the age of 13, when he joined his talented mother and father, Rosann and Louis (also known as the “Perry Lane Orchestra”) at the former Island Squire Restaurant in Middle Island, where they performed for many years! His mom, Rosann, was a member of a popular all-girl band in the 60’s called the “Female Beatles”. His dad toured the United States with various bands as a trumpet player with a sound like Harry James.

When Louis is not playing music, he is dancing. He is accomplished in ballroom and Latin dancing, having an excellent lead, precise technique and smooth style. At one time, he taught dance on popular cruise lines. Now he teaches group and private lessons and runs many dance venues on Long Island.