Wow! Enjoy Vinny Munno’s Championship dancing at the national United States Dance Championships (USDC) 2002, with Pro Susie Thompson! Vinny, who started his career as a Ballet Dancer with Ballet Companies in New York and New Jersey, is a Co-Owner of Goldcoast Ballroom, along with Jeff Sandler.

Here are Vinny Munno and Susie Thompson’s winning performances in both the Latin Division and the Ballroom Smooth Division at the USDC in 2002: 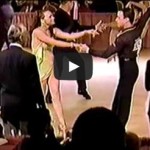