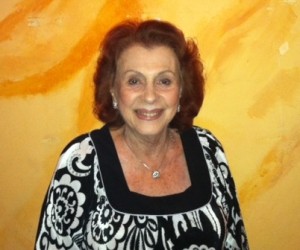 Rosanna Ziff volunteers at Goldcoast Ballroom, and loves serving with Helen and the entire Goldcoast team.

Rosanna has been dancing for as long as she can remember.

Prior to moving to Florida, she and her husband lived in New York City, where they were members of the Dance Educators of America. They began teaching professionally the year that “The Hustle” rose to number one on the pop charts.

They taught ballroom dancing privately, in colleges and on cruise ships as well as becoming DJ’s for corporate galas, bar mitzvahs and weddings.

When they moved to Florida, Rosanna became President of the local chapter of ARMDI, the Israeli Red Cross. Her South Florida chapter of ARMDI is one of the largest chapters in the nation. It has held monthly dances at Goldcoast Ballroom for the past 15 years.

Rosanna enjoys her volunteer work at Goldcoast Ballroom, and she looks forward to continuing to put on her dancing shoes every week.

Rosanna volunteers at Goldcoast Ballroom, and loves serving with Helen and the entire Goldcoast team.