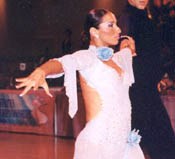 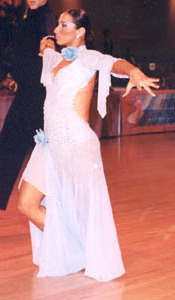 Olga Bogdanov is among the most famous and decorated dancers in America and in the World. From a bronze medal at the European Championships in 1996 to Russian Open medalists and World Representative in 1998 to Rising Star Champion at the Ohio Star Ball in 2001, Olga has been a premier dancer.

Born in Astrakhan, a Russian city on the Volga River, Olga has been dancing since 5 years of age. She started in competition in both Latin and Standard, but soon focused on the Smooth dances.

Late in 1998, US Standard Champions Jonathon Wilkins and Katusha Demidova sponsored her immigration to the US.

Now residing in Florida, Olga competes, performs, teaches and even designs clothing. All of this in addition to raising her daughter, Alina!

Olga has been an instructor at Goldcoast Ballroom since the year 2000. She teaches private lessons and provides coaching – to both couples and single individuals – in International Standard and American Smooth style ballroom dance, including all dances. She also teaches Latin and Rhythm dances.

The following video shows Olga’s winning performance, with her then partner Sasha Bogdanov, when they won First Place in the Professional Rising Star category at the Ohio Star Ball, one of the principal ballroom dance competition held annually in the United States »

This video shows Olga Bogdanov and Sasha Bogdanov’s winning performance at the Colorado Star Ball. In that competition, they placed Second in the Professional Standard division, next after the world renowned Giampiero Giannico and Charlotta Jorgensen »